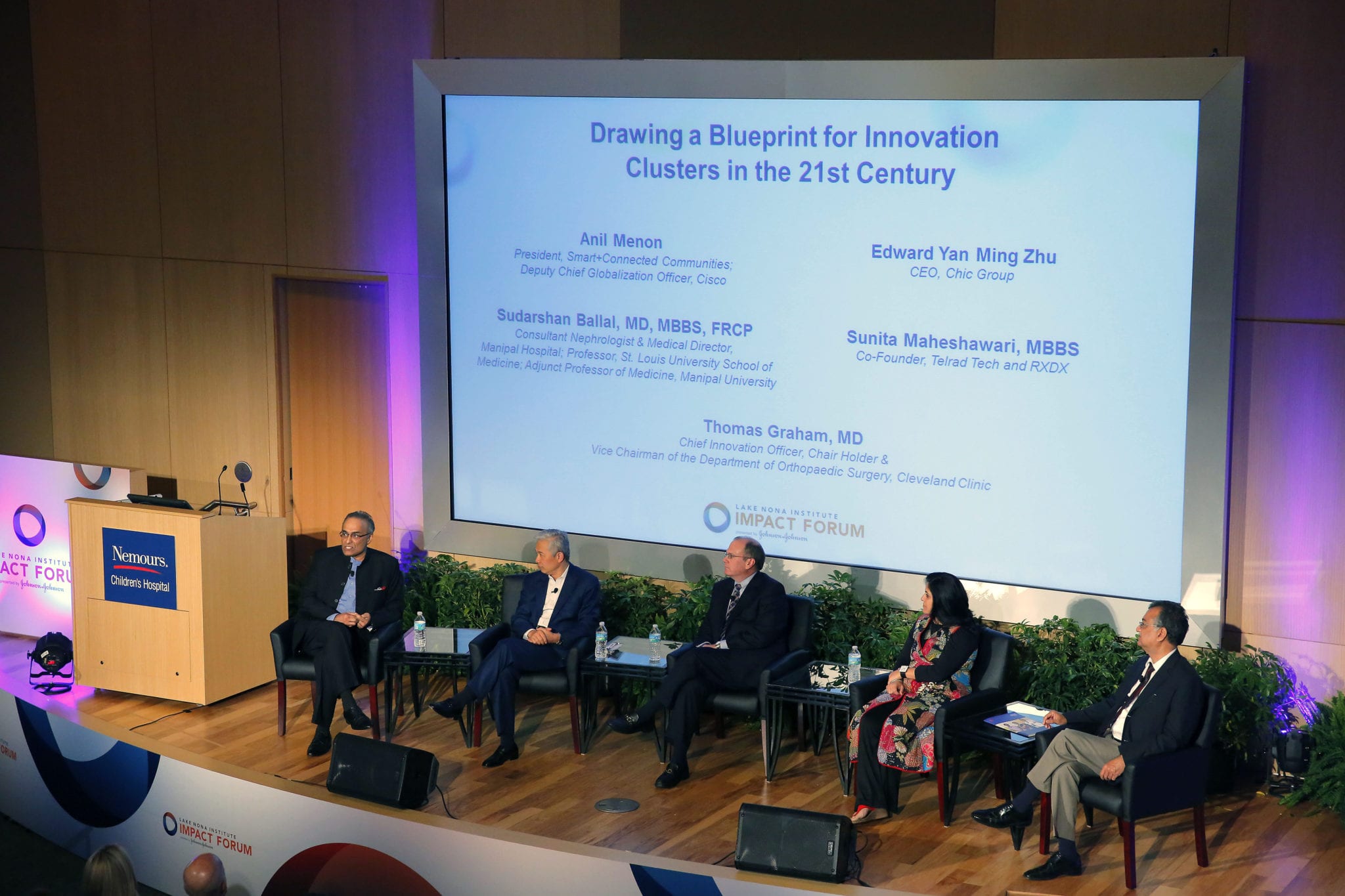 The second day of the 2015 Lake Nona Impact Forum was as wide-ranging and interesting as its 250 attendees.

The jam-packed agenda included engaging conversations on such topics as health clusters, big and small data, consumer engagement (and the role media plays in that effort), next-generation cancer therapy, the economics of health care for employers and pharmaceutical companies, and discussions on brain health. Following are some highlights.

The morning kicked off with an energetic discussion lead by Anil Menon, president of Cisco Systems, about the many attributes needed to create and draw smart minds to an innovation cluster. He cited three as the most important: good weather, access to universities, and a strong infrastructure that allows for easy connection to the outside word – not unlike those featured in the Forum’s host community of Lake Nona.

Richard Carmona, former Surgeon General of the United States, took the stage and provided a compelling look into the future of personalized health and its impact on the quality of care. He explained how patients of the not-to-distant future will have their entire health profile – including genomic profile, activity and sleep patterns, and biometric data – stored in the cloud and delivered in real time to doctors.

During the following discussion, Daniel Kraft, executive director and Future Med health care innovator, dove deeper into personalized medicine by addressing the concept of the “quantified self” and how that translates to quantified – or measurable – health. He explained the myriad devices available to individuals, including HealthPatch, a biosensor that continuously captures biometric data and streams it anywhere in the world. He also introduced the idea of building the Uber of Health care – in short, connecting people to and improving their engagement with their own health data.

Troyen Brennan, chief medical officer of CVS Health Corporation, took the stage and delivered a realistic and sobering view into America’s health care spending, and the toll that chronic yet preventable diseases are taking on the system. He affirmed that health care innovations that feed data back to providers will ultimately improve outcomes.

As the morning concluded, Jeff Arnold, founder and CEO of ShareCare, led a star-studded line-up onto the stage, which included Dr. Mehmet Oz, host of the “Dr. Oz Show,” Dr. Sanjay Gupta, chief medical correspondent at CNN, and Mark Hyman, director of Cleveland Clinic’s Center for Functional Medicine. The panelists first discussed whether self-awareness about actual, not perceived, stress truly impacts behavior. They also announced the beta-launch of the Sharecare app, which monitors voice tone on phone calls and analyzes it for stress factors such as worry, anxiety and anger. The crowd-sourced, adaptive trial will be overseen by Dr. Gupta and results will be released at the 2016 Lake Nona Impact Forum.

Visit this website soon for an overview of the afternoon sessions. Don’t forget to follow the conversation on Twitter us @LN_Institute and join the discussion at #LNIF15.